I started this blog back in 2008 (wow I can’t believe it’s been that long!) to document all the great deals I was getting on my shopping adventures as well as share beauty and fashion tips. I had a lot of fun doing it – my wallet didn’t. Now that I’m a little older and hopefully a little wiser, my mindset on money has definitely changed. While I still love to shop, I no longer feel like I need to do it as much as I once did.

If you’ve noticed lately, I’ve had a few scattered posts about life and personal finance. I’ve been putting a lot of thought into my future and financial goals. And I’d like to share all that with you. I thought about keeping this blog called ‘Little Miss Savvy’ and blogging about both beauty and finance. But that to me felt too scattered and I wanted to give my blog a purpose.

With that said, I’ve started a new blog called Savvy With Saving where I’ll document all my personal finance and life adventures as a 20-something living in a big city. I may come back to this blog one day and continue to write about beauty but for now, I’m bidding adieu. Thanks for reading all this time and I hope you see you over at Savvy With Saving!

Best,
Connie
Posted by Little Miss Savvy at 9:35 AM 8 comments:

We're well in the middle of bikini season. While we all try to enjoy some fun the sun, many of us can't help but feel a little self-conscious in those itsy bitsy, teeny tiny bikinis (myself included). Hibernation in the winter can really make you forget about your body so the summer months for me are always about eating right and getting back in shape. A little bit of weight gain in my teenage years gave me some unwanted stretch marks, which have been surprisingly difficult to get rid of. Yep, you heard right, stretch marks aren't only a foe of pregnant ladies - there are many causes. Everything from smoking to genetics can cause them, but if you have them, there are some great home remedies to help get rid of them. Here are a few tips:

1. Apply Cocoa Butter - Cocoa butter is great for scars and skin discoloration  - and it's also great for stretch marks. While it'll time and patience, it'll help fade it so be sure to apply at least twice a day. And on the plus side, it smells great!

2. Drink Water - You always hear this - drink water and lots of it. Water is great for the body and skin but I forgot never drink about. It's a great purifier and rids your body of toxins. It also helps with skins elasticity, which help fight stretch marks. Try to drink at least 8 glasses a day. If it helps, throw a few slices of lemons or cucumber to add a little bite of flavor.

3. Prevention - While this may seem a little too obvious, the easiest way to prevent stretch marks is preventing it in the first place. Obviously, there are some instances where you can't avoid it (like pregnancy). However, if you exercise and have a balanced diet, your weight won't fluctuate and your skin will be happier.

There are plenty of other easy tips but these are just a few. But at the end of the day, it's also important to remember to be comfortable in your own body. Enjoy the summer and rock that bikini!
Posted by Little Miss Savvy at 9:49 PM 2 comments:

How to Get Rid of Greasy Hair


My hair is a mess during the summertime. Literally, a hot mess. The fluctuations in weather and humidity wreak havoc on my strands. I generally have oily hair and it only seems to get worse in the summertime. I’ve tried numerous different approaches – some have worked and others have been a complete failure. From testing out different products and routines to asking others for advice, I’ve tried it all. Here are some of my tips for battling greasy hair:


Everyone’s scalp is different so the most important part is finding the right routines and products for you. Go ahead and test out different things to see what works.

Do you have any tips for battling greasy hair during the summertime?
Posted by Little Miss Savvy at 10:26 AM No comments:

What I Learned From Quitting My Job

About two years ago, I decided to leave my-then job for another opportunity. One, I was unhappy where I was and two, I wanted to try something else. Making the decision to quit my job was easy, actually doing it was the hard part. I had the worst anxiety in the days leading up to it. It was my first job after college and so it was my first time ever quitting a job. While I knew it was the absolute right decision for me to go, something about actually doing it felt so wrong. Here is what I learned:

1. Everyone is Replaceable - I had a enormous sense of loyalty to my boss. She gave me a great opportunity right out of college and I considered her to be a mentor of sorts. I didn't want to put her in a tough position. I kept thinking what is she going to do without me? Well, she did just fine. It's sad to say but everyone is replaceable. Yes, it might take some time for them to find someone new and train them but it'll work out just fine.

2. It's Not Personal, It's Business - I had built genuine friendships with people outside of work and so it was difficult for me to separate work from life. I didn't want anyone to take my decision leaving personally because I genuinely liked everyone. But at the end of the day, you're there to work and earn a paycheck - it's business. I'm still great friends with many of my old co-workers.

3. Bosses Are People Too - We forget this sometimes but bosses are people too. They too have dreams, goals, ambitions...oh and a life outside of work. Chances are, they've been in your shoes before. They'll understand.

4. You Have To Take Risks - This is one thing I still have to remind myself everyday. Don't be afraid to take risks. I was scared to leave because I was so comfortable where I was. But I knew if I stayed there, I wouldn't get to where I wanted to be. Take chances. If it doesn't work out, then you move on to the next thing.

5. Plan Ahead - Luckily for me, I had landed a job offer before I quit and I also saved up a sizable amount. Yes, follow your dreams but be smart about it. Make sure that you'll be able to financially support your self post-job.

6. Nothing is Permanent - I was also afraid I wouldn't be happy at my new job. But then I realized, so what? I can move on. You're not tied to anything.

I read a interesting article not too long ago (I wish I could find it) about how Gen Y-ers have approximately 7 different jobs in there 20s. Compare that to Baby Boomers or Gen X-ers, who typically held the same job for 10+ years. Some people see this as an alarming example of how fickle or even irresponsible young adults are today. I think it's a positive sign. As long as you are smart about it, don't settle. For most of us, we're not going to land our dream job right out of college. It's not a bad thing to go out and test the waters. You never know until you try.

Going back to my quitting story, I eventually mustered up enough courage to tell my boss. She was actually very supportive of my decision (like I said, bosses are people too). It turned out that my next opportunity wasn't what I had thought it would be and I left that job too (quitting the second time around was much easier). I'm happier where I am now but I think my dream job is still out there. To be continued...
Posted by Little Miss Savvy at 8:30 AM No comments: 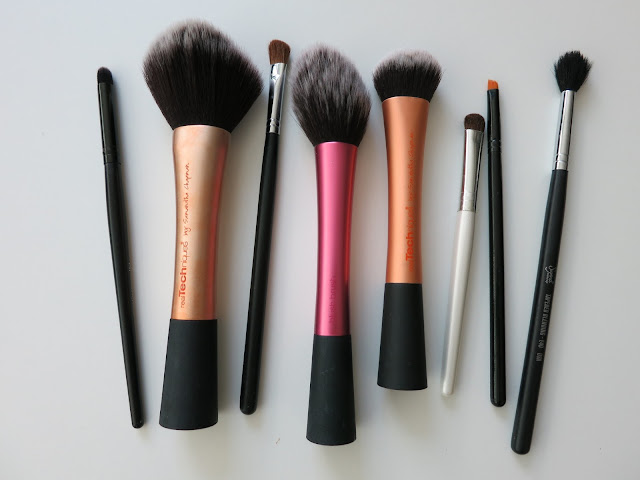 It's no secret that I like to splurge every once in a while on beauty products. I'm becoming more and more conscious about money and spending but if I have once weakness, it's makeup. My full time gig is in the beauty industry and when you spend your days marketing all kinds of makeup, you can't help but lust after it yourself. There's certainly some higher end products that are worth the price tags. But I realized that all the makeup brushes I love are pretty affordable. I'm pretty basic with my everyday routine so I don't really need anything special or high end. The brushes I use do just the trick and are affordable (in fact, one of them is only a buck!).

6. elf Eyeshadrow Brush (yes guys this one is only a dollar!)
7. Sigma Tapered Blending E40

I was going to go into more detail about each one but then I realized I'm going to end up saying the same thing about all of them. These are all great basic brushes that are good quality for the price you pay for them. They're great if you're just starting your makeup collection or want a good brush without having to spend 50 bucks. Beauty doesn't always have to cost an arm and a leg...well cause most of use don't have any extra limbs to spare (don't you just love that saying?).
Posted by Little Miss Savvy at 8:30 AM 1 comment:

Little Miss Savvy
New York, NY, United States
i'm a 20-something living in nyc with a slightly unhealthy love for coffee and shopping. here's my thoughts on trying to figure out this little thing called life. email me at littlemisssavvy@gmail.com